Report of the March 2018 meeting of Wookey Hole WI
The snow deposited by the Arctic weather of last week was happily thawed by the time we met
for our March meeting. President Jill Deane welcomed our speaker, Mr Ian Caskie, a visitor
services volunteer for the SS Great Britain. His slide presentation covered the history of the ship,
‘From launch to re-launch’.
Although Isambard Kingdom Brunel had never built a ship before, his engineering experience
with the Great Western Railway led to his being contracted to build four wooden paddle steamers
for the British Steamship Company. The first ship Brunel built was a paddle steamer, the Great
Western, but her performance persuaded Brunel that the design and materials were
unsatisfactory for ocean use, so he completely rethought his ideas. The amount of wood required
to reinforce a ship for rough seas was, unexpectedly, very much heavier than a much thinner and
stronger iron hull. Also, an engine propelled by a screw was more efficient than paddles, which
lifted from the water in heavy seas.
In spite of initial doubts, the design worked well, but the ship was unfortunately caught up in a
series of unexpected adventures, that would not have been anticipated by Prince Albert who
attended her launch. Having started as a luxury passenger liner, an unfortunate grounding on a
beach in Ireland started her on a downward spiral, as salvaging her bankrupted the owners. For
some time she went back and forth to Australia transporting gold miners and other migrants in
less than luxurious conditions. She was also a troopship during the Crimean War. Use as a
cargo vessel with all her fittings stripped out, led to an eventual further grounding in the Falkland
Islands, where she was used as a warehouse before being scuttled and abandoned.
Since 1970, when she was rescued as a rusting shell and towed back to her original dock in
Bristol’s Floating Harbour she has been conserved, very expensively. Many innovative
techniques have been used to present her as a museum that illustrates all the phases of her
chequered life. Opening this month is a new addition on the quayside, a museum devoted to
Isambard Kingdom Brunel, which will add even more interest to the tourist and educational
experience. Ian told us that part of his purpose in speaking to groups such as ours is to raise
funds for the continued maintenance, especially the gas bill for the dehydration plant in the base
of the ship.
Myrtle thanked him for his very enlightening and fascinating talk. Ian judged our competition,
which in honour of the SS Great Britain, was for nautical themed items. As befits an island nation,
members came up with an astonishing variety of memorabilia, including a Russian sailor’s cap.
The WI is always a surprise.
Rose Docherty 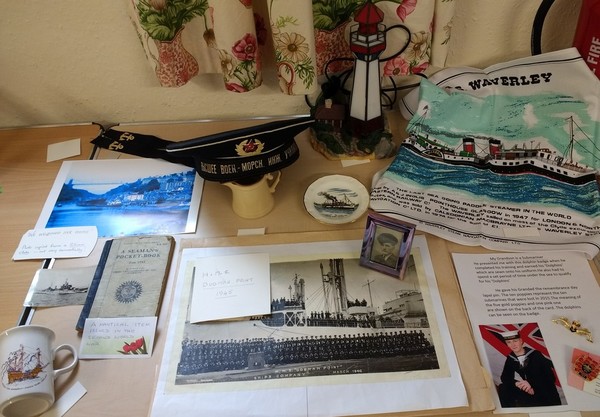