The Wookey Hole Club, built in 1884, has a long and colourful history. Minutes of the Club Committee are still in existence from its inauguration through to the present day, with only two periods, 1940-1949 and 1974-1980, having been mislaid. The content of these documents gives a fascinating insight into the recreational and social behaviour of village residents over the past century. 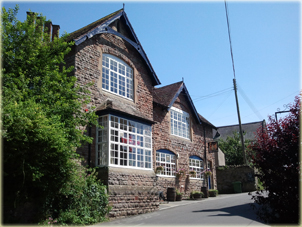 Obtaining a club for the village appears to have been an arduous process. In 1875 a certain Mr Boyce advised Mr. W.S. Hodgkinson (Jnr) how the residents of Wookey Hole were anxious to get a club in the village. This request was further relayed to Mr. Hodgkinson (Snr) who was very willing to build a suitable establishment. Land was a scarce commodity then and finding a suitable location proved difficult. When a plot was found, a Mr. Stephens raised a petition against the landowner, Mr. Band, which strange to say, did not have a single name attached to it. And so the Club House was built in its present location, where before two thatched cottages stood. This was by now nine years after the initial request.

In 1884 the following bill was distributed to every house in the village:

"Wookey Hole Club. A Public Meeting will be held in the Wookey Hole School-room, at eight p.m. on Monday February 25, with a view to forming a Club for Social Intercourse and Recreation and of appointing Trustees to rent the New Club Building from Mr. Hodgkinson on terms to be then submitted by him"

The ensuing meeting proved lively. Prior to the meeting it seems there was difficulty in forming the club. Mr. Hodgkinson (Jnr.) felt that the requirements of the village were not sufficient for a Club and with only 90 people present at the meeting he believed they would each have to pay £1 annual subscription to maintain the premises. This proved highly contentious and after much argument the fee was fixed at 10/- with Mr. Hodgkinson and three elected trustees defining many rules for the first year.

Until a time between 1940 and 1949 members were only men of the village. For them entertainment was provided by a billiard table, situated in what is now the Pool Room, along with many of the more common pub games, Shove Ha'penny, Cribbage and Dominoes, all of which survive today. Daily newspapers and periodicals were bought for the members, these being later auctioned to help club funds. Informal 'Smoking Concerts' were regularly organised purely for the enjoyment of the gentry in the village. And for the 'Wives and Sweethearts' concerts and dances gave an opportunity to see the luxuries the men were enjoying. The first of these was a Dance and Supper held on Easter Monday in 1884. Closely packed seating found that 200 people could be accommodated in the Assembly Room! Further entertainment evenings for the whole village were given by the Wookey Hole Minstrel group amongst others.

The first years' financial accounts quickly dispelled Mr. Hodgkinson's earlier doubts about the future of the Club. Unfortunately this profitability could not be sustained, when in 1886 the statement of accounts began to show losses. Expenditure was high, higher than anybody expected. In order to counteract these escalating costs the steward accepted a reduced wage and luxuries like the Western Gazette were cancelled. Mr. Hodgkinson met many of the liabilities as they occurred during his term as President, whilst the Mill managers also gave personal contributions to maintain the premises for the use of the predominantly mill employee membership. The Hodgkinsons' kind generosity continued through to the 1950's with Gerard and Guy. In his will Guy Hodgkinson left the Club premises to his trustees on the condition that they 'permit the Committee of the Wookey Hole Club to continue the use and enjoy the same as a Club for the benefit of the Village.....at an annual rent of One shilling.....But in the event of the premises for any reason ceasing to used and occupied as a Club....the same shall fall into my residuary estate....'. To the kindness and generosity of Guy we will always be indebted.

After the First World War a supper for 'the boys' was laid on by the Club. 22 members enlisted to the fighting forces, of these 17 returned. The whole of the club was decorated and during the supper an orchestra from Bristol played. After the meal the Assembly Room was cleared for the dancing to commence and continue into the early hours of the morning. The Second World War, by contrast, saw the Club being used in conjunction with the 449th Company of the 66th Searchlight Regiment. They made the premises their base and the Club saw fit to split the profits equally between the Searchlight Company and the Club. Very early into the war the Club was used as a centre for the dispersal of evacuated children to families in the district kind enough to give them a home. Celebrations to mark the return of the servicemen are unknown due to the unfortunate loss of the minutes covering this crucial period of the Clubs history.

The Club became extremely popular after the Second World War. This was a time when women were now allowed to become members of the Club and form a large percentage of the Committee. Many of the village organisations began to use the premises as their base, in particular the Womens Institute who, from 1947 until the Skittle Alley was installed in 1965, held many functions at the Club. The Royal Antediluvian Order of Buffaloes from 1965 to 1986 used the Club for their meetings and in return helped maintain the building. To further make the premises accessible in 1958 we see the Assembly Room advertised as the Village Hall.

At present the Club has around 150 members. Nine skittle teams have chosen the premises as their home alley and each have enjoyed reasonable success in their respective divisions of the Wells and District and the Mendip Farmers Skittle Leagues. In addition, the Wookey Hole Club have 2 darts teams.

In recent years, the management committee has striven to give the Club a more comfortable atmosphere for the enjoyment of the members and this is set to continue with a further programme of improvements. For the Club to survive and fulfill the hopes of Guy Hodgkinson, it is necessary for the Bar to generate sufficient income and be well supported. The Club is fortunate to have a dedicated Bar Committee and a team of workers working hard to maintain and improve the Club.